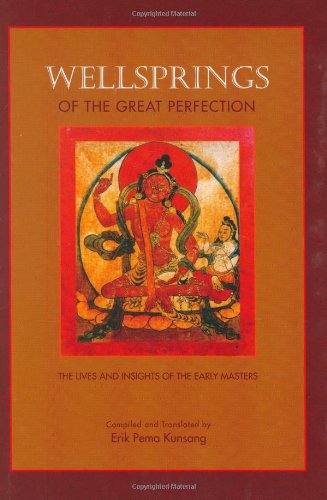 Wellsprings of the Great Perfection-Used

Wellsprings of the Great Perfection: The Lives and Insights of the Early Masters

For centuries, Dzogchen, often translated as the "Great Perfection," was a secretly transmitted teaching, unknown beyond the Tibetan culture. Wellsprings of the Great Perfection explains how the Dzogchen teachings came into the world, who received them, and through whom they passed. This impressive collection of translations, many of which have never before appeared in English, is drawn from a vast number of original classical Tibetan sources and includes selections of realization songs by early masters of the lineage. The book describes the early Dzogchen masters’s lives and what they taught, with particular emphasis on events that took place before the teachings were transmitted to Tibet. Enhanced by specially commissioned line drawings by a notable living Tibetan artist, as well as by rare samples of the mystical symbolic script of the dakinis, the book is both a fascinating historical document and a source of sacred knowledge and inspiration.