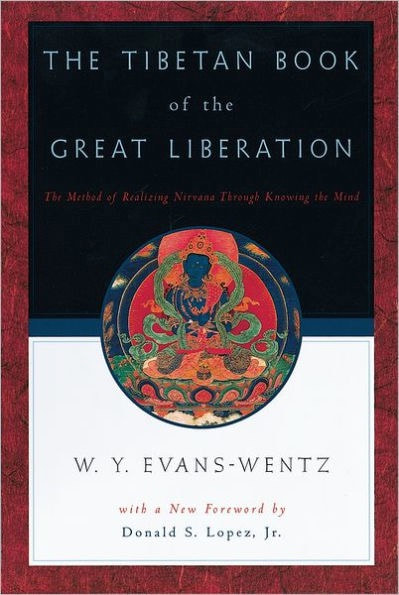 The Tibetan Book of the Great Liberation-Used

The Tibetan Book of the Great Liberation: Or the Method of Realizing Nirvana through Knowing the Mind

﻿The Tibetan Book of the Great Liberation, which was unknown to the Western world until its first publication in 1954, speaks to the quintessence of the Supreme Path, or Mahāyāna, and fully reveals the yogic method of attaining Enlightenment. Such attainment can happen, as shown here, by means of knowing the One Mind, the cosmic All-Consciousness, without recourse to the postures, breathings, and other techniques associated with the lower yogas. The original text for this volume belongs to the Bardo Thödol series of treatises concerning various ways of achieving transcendence, a series that figures into the Tantric school of the Mahāyāna. Authorship of this particular volume is attributed to the legendary Padma-Sambhava, who journeyed from India to Tibet in the 8th century, as the story goes, at the invitation of a Tibetan king. Padma-Sambhava's text per se is preceded by an account of the great guru's own life and secret doctrines. It is followed by the testamentary teachings of

the Guru Phadampa Sangay, which are meant to augment the thought of the other gurus discussed herein.

Still more useful supplementary material will be found in the book's introductory remarks, by its editor Evans-Wentz and by the eminent psychoanalyst C. G. Jung. The former presents a 100-page General Introduction that explains several key names and notions (such as Nirvāna, for starters) with the lucidity, ease, and sagacity that are this scholar's hallmark; the latter offers a Psychological Commentary that weighs the differences between Eastern and Western modes of thought before equating the "collective unconscious" with the Enlightened Mind of the Buddhist. As with the other three volumes in the late Evans-Wentz's critically acclaimed Tibetan series, all four of which are being published by Oxford in new editions, this book also features a new Foreword by Donald S. Lopez.