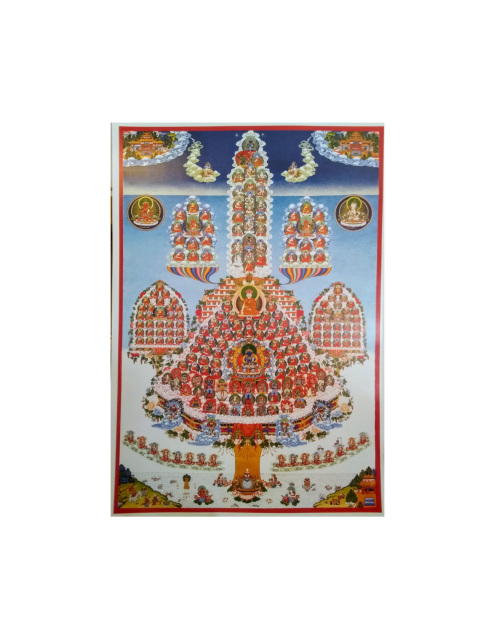 Each denomination, and even each lineage has a "geneological" chart that is known as the Refuge Tree. In it are represented the founders and teachers in an arrangement that symbolizes the interconnectedness of the various groups.

Kyobpa Jikten Sumgon (1143-1217) is the founder of Drikung Kagyu Lineage and one of the greatest teachers in his own time and he was a junior contemporary of the First Karmapa. His father was an accomplished practitioner of Yamantaka and they are descended from a noble family with divine ancestry, known as the Kyura clan. Jikten Sumgön was one of the most notable masters of Tibetan Buddhism, and his teachings had wide-reaching influence for centuries to come, and up to 130,000 monks and practitioners came from all over Tibet, Central Asia, China and across the Himalayan region to train with him.

As the Dalai Lama Explains~

"Within the context of Tibetan Buddhism, the importance of lineage extends far beyond the ordinary sense of a particular line of inheritance or descent. Lineage is a sacred trust through which the integrity of Buddha's teachings is preserved intact as it is transmitted from one generation to the next. The vital link through which the spiritual tradition is nourished and maintained is the profound connection between an enlightened master and perfectly devoted disciple. The master-disciple relationship is considered extremely sacred by all the major schools of Tibetan Buddhism."

Add to Cart
​"It doesn't matter whether one calls oneself a Buddhist or not a Buddhist. The Dharma is Love." ~ H.E. Garchen Rinpoche